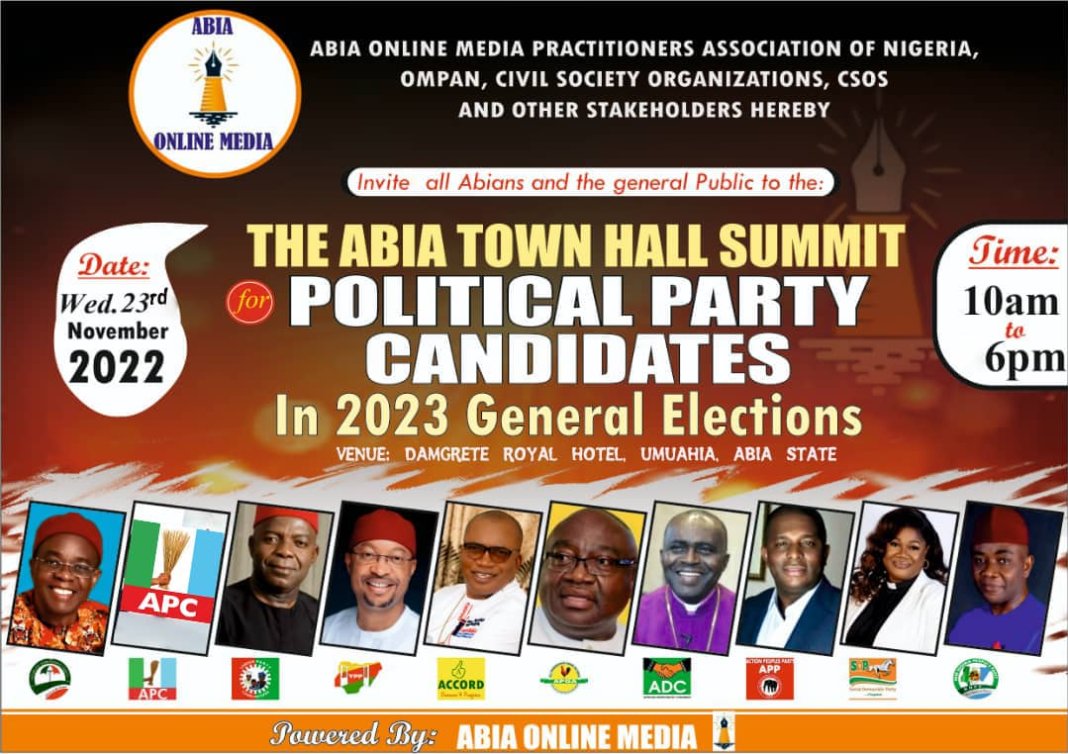 Media Practitioners in Abia State under the auspices of Online Media Practitioners Association of Nigeria, OMPAN and other stakeholders on Thursday announced the convening of Town Hall Summit to provide a formal platform for candidates of political parties to share their missions,visions and motives for seeking elective political offices with Abians and the general public.

In a press release signed by the Chairman OMPAN Abia State,Chief Paddy Anyatonwu stated that the difference between the Town Hall interface and the open air campaigns is that the atmosphere of the Town Hall session provides Abians and the general public the opportunity to closely interrogate the candidates by asking specific questions and seeking clarifications on how they would implement their proposed manifestos.

“The campaigns in the open are more like carnivals ,but during the town hall session,the candidates would provide clarifications on how they would execute the proposals in their manifestos”chief Anyatonwu explained.

He further added that OMPAN in partnership with other media establishments in the State is empowered by Section 22 of the 1999 Constitution as amended, which stated that “the press, radio, television and other agencies of the mass media to, at all time, be free to uphold the responsibility and accountability of the government to the people” to facilitate the town hall session.

The release states that,” We hereby invite all the Governorship ,the Senatorial and the Federal house of representatives candidates from all the political parties in Abia seeking offices in the 2023 General Election to avail themselves of this opportunity to explain in details their manifestos to Abians”

The programme would hold on Wednesday, November 23,2022 in three sessions at Damgrate Hotel, Umuahia.

It further added that the Town Hall sessions would be broadcast live on two radio stations and would be streamed to over 34 Online newspaper platforms reaching millions of Abians world wide.